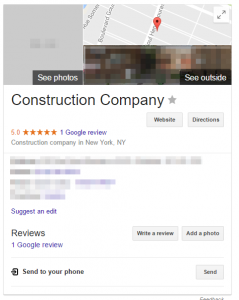 UPDATE FEBRUARY 10, 2017: Google no longer requires 5 reviews to show stars. Now, you only need 1-2 business reviews in Google for stars to show up. In addition, Google no longer uses Bayesian average to calculate average score.

Previously, businesses with 5 star reviews could show an average score of 4.8 because of Bayesian average calculations. This is no longer the case. Google uses a standard average to calculate review score. So if you have all 5 star reviews, you will see 5 now.

Many clients have asked me this question, “How many reviews are needed to show stars on Google?”. So I’ve decided to write a quick post and answer it for anyone that might be looking for an answer to this question.

In the past when Google acquired Zagat, all local business listings began to show a Zagat score. The closer you got to a score of 30, the better you were off. At the time, the minimum amount of reviews on Google needed to get a Zagat score was 10.

Over a year ago, when Google began to consolidate Google Maps local listings with Google+ into Google+ business pages (and now into Google My Business) they introduced 5 star system instead of a Zagat score. It had it’s share of issues at the time. One major issue of fluctuating overall scores. A Google employee did note that “as we improve the way we calculate overall ratings, the number displayed may fluctuate slightly.”

This brings me to the answer. For majority of businesses, the minimum number of reviews needed to get stars to show in search results and local listings is 5. However, I mentioned the fluctuating rating for a reason. We’ve seen and heard from others that there are times when a business will show stars even with 4 reviews. This is rare, but can happen. Google doesn’t say directly how many reviews it takes to show stars, but as our research shows 5 is the magic number you should aim for. This is a lot better than what we needed to get a Zagat score.

Remember this, the more 5-star reviews you get the better you’re off. This applies to all local listings and review websites – Yelp, Google+, TripAdvisor, MerchantCircle, etc. Whatever makes sense for your specific industry, do use it and get your reviews. You won’t get reviews if you don’t ask, so begin by simply asking your existing and past customers to leave a review either on Google+ or Yelp. Those two websites should be a good start! We’ll talk about a reputation marketing strategy in another post very soon.

Remember, you’re only one customer away from a bad reputation. Make each count!